While most people would look at a home built in 1995 and see it as the perfect opportunity to do a complete overhaul, when Joel and Sylvia Williams purchased the 14,000 square-foot home now lovingly known as “The Williams Estate,” they saw it as the chance to live amongst European history—without ever having to set foot abroad. 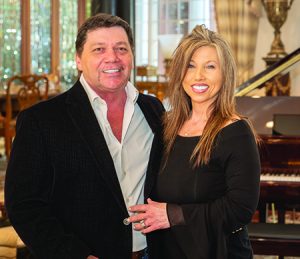 Boasting numerous rooms that include two guest bedrooms with en-suite baths, a grand master suite, a massive kitchen, and a library in addition to a full guest quarter space above the garage, the house would hardly be considered lacking in any way. Rather, it could only be given the classification of “grand” or, perhaps, “stately,” so impressive a presence does each and every room hold—not only in size, but in detail. From the moment one enters the estate, the eye knows not where to begin its tour, be it the baccarat chandelier whose glittered luminescence casts an ethereal glow over a painted mural that mimics the one gracing the ceiling of the Palace of Versailles or the 18 faux-marble columns in a living room populated with authentic 400 year-old Roman statues. Continuing the theme of storied pieces, the fireplace mantel in the master suite traces back to a 250-year-old home in Lyons, France, while the bookcase in the library was once owned by business tycoon JP Morgan. 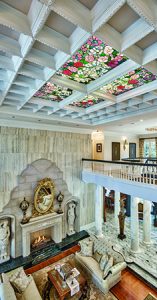 “We moved to Destin in 1995, when the original owners had just finished construction of the home,” recalls Sylvia, a former nurse who currently spends much of her time pursuing a degree in a Public Health Specialists and passionately promoting vaccine safety awareness and research. “It’s an impressive home, and we always admired its large columns and architecture—kind of Southern plantation-style home with European influence.” And 23 years later when the Williamses toured the home after it spent years on the market, the couple finally had the chance to make it their own—though most of those unique touches that, perhaps, made it unsellable in some regards, so specific a buyer did they require—signing the papers to take possession of a gem that they knew just how to polish.

The bulk of it was already there—sprawling gardens with statues from the Palace of Versailles, huge urns at the massive front gates used in the ’92 Barcelona Olympics and believed to be from the 1800’s, lampposts surrounding the property that once illuminated the streets of Italy. But the aforementioned mural that graces the foyer ceiling is a new addition executed by the talented brushstrokes of faux artist Myra Langhram, as is the marbleized look of the once-white columns in the living room. Even so, their existence seems natural, so seamlessly do they marry with the rest of the details that comprise the home, each with their long history and impressive pedigrees boasting lineage from Italy, Spain, and France, countries travelled often by the home’s original owners, who shipped their fantastic finds home and seemingly built the estate around them. 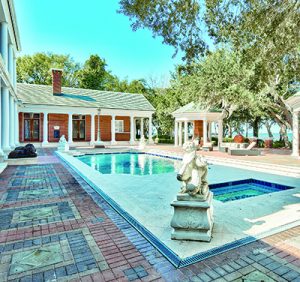 The task at hand for the Williamses when they took over ownership was to update the things that needed updating without compromising the integrity of the home, each task completed under the watchful eye of Joel, whose experience in development has given him a great deal of expertise in renovations. “Joel is a perfectionist and is extremely detail-oriented in all of his development projects,” Sylvia notes. And so they set about their work, ripping out carpets, removing wallpaper, overhauling the kitchen and the guest suite above the garage. Naturally, the marble in the kitchen, living room, dining room, and foyer was preserved, having been imported from Barcelona by the original owners and still possessing too great a beauty to tear out—and it fits well with the aesthetic of the newly worked space, complimented by the kitchen’s recently added black porcelain tile flooring and empire chandelier. “We wanted to leave as much of the house as it originally was to preserve the history of the home,” Sylvia explains. More work is being planned over the next months, but even its completion will hardly compromise what the home was always meant to be.

And while they take some time off from further renovations to ready their home to host the Destin Charity Wine Auction patron’s dinner benefiting Food For Thought Outreach, Sylvia and Joel—an entrepreneur and developer whose own personal history makes him a passionate advocate for children in need—enjoy their time at the estate that is now fully theirs, savoring the view of the bay from their dock as dolphins play and birds fly tranquilly on the breeze, at home amidst breathtaking treasures made both by nature and by man.

Possessing a degree of ability so natural that it comes to them like breathing, the pair takes great satisfaction in seeing dramatic transformations come to life; and when they were recently tasked with two projects whose original forms were decidedly out-of-date by several decades in terms of aesthetics, Saiz and Reeves were given the chance to shine as they took the two spaces down to their studs and built them back up into breathtaking works of modern, livable art. 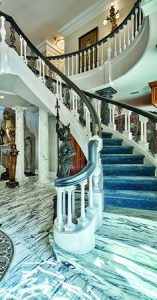 Both two-bedroom units, the condos they recently renovated in Miramar Beach and Holiday Isle would be considered on the smaller side by some standards, each coming in around 1100 square feet. Naturally, working within the footprint of the condos was necessary, as was the need to respect the locations of various electrical and plumbing lines as well as load-bearing walls. A challenge, to be sure, but one the designers readily rose to meet, using their creativity and vision to achieve every item on their clients’ wish lists without compromising style or functionality in any way. “You have to adapt and be able to change quickly with what’s ‘discovered’ when the walls are taken down, but that’s one of the things that makes condo projects such an interesting undertaking,” says Reeves.

“Both projects required that we strip them down beyond the studs, as their finishes were all pretty dark and basically a complete step back in time,” Reeves goes on to explain. “The changes are completely drastic, but we’ve brought them into a more modern aesthetic that really takes advantage of their locations and their views to give them a more luxury feel.” 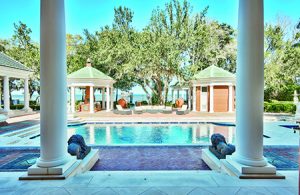 “Our vision for our condo was modern, minimalist and functional—we didn’t want to see any of the beach kitsch that’s so common to the area,” says Eddie Hardin, who owns the Beach House condo in Miramar Beach with partner Chris Slaughter. “The way the entire look came together—how the space functions and flows—creates a very serene environment, and we use every bit of the space. Todd made the orientation of the space work perfectly, and he did an incredible job of pulling together the colors, patterns, fabrics and furnishings to create a completely comforting environment. Now, it suits our needs perfectly and frames our amazing view of the Emerald Coast exactly as we’d hoped!”

“Todd’s expertise and knowledge enabled us to complete the project, which certainly exceeded our expectations. It’s not the typical condo remodel,” says Jill Parks, who now enjoys the fully renovated condo in Inlet Reef with her husband, Glenn, when they come to the area on vacation. “We have an awesome view of the ocean, and Todd’s ability to bring the outdoors in allows us to enjoy the inside as much as the outside. We love showing the condo off because everyone always says that it looks like a picture from a magazine!”

From the grandest of homes to the most challenging of small spaces, idMI creates modern luxury at its best, and they’ve got the vision to see beyond the old and bring out the new.