You are at:Home»Featured Story»Obligatory Irish Foods You Should Eat on St. Patrick’s Day

When St. Patrick’s Day rolls around, green beer, shamrocks, and garish green tee shirts emblazoned with phrases like, “Kiss me, I’m Irish” are pretty much a given. And though they might be festive and fun, they’re hardly authentic to the Emerald Isle—a land full of history, lore, and spirit whose time-honored traditions and culture are as rich and colorful as any rainbow. Sure, it’s fun to get in on the kitsch, but an even better way to get a taste of Ireland is to REALLY get a taste of Ireland.

St. Patrick’s Day wouldn’t be complete without Irish soda bread, and with good reason. It has great ties to their history, making its mark in the late 1830’s, when the first iteration of baking soda was introduced to the U.K. 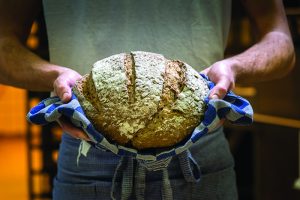 Because Ireland was in such a state of financial distress and lacked access to many ingredients, they had to make the most of the basic and inexpensive ingredients that were available to them—“soft” wheat flour, baking soda, salt, and soured milk. Hence, the creation of Irish soda bread. Soda bread was also ideal for families who lived in isolated areas with little access to cooking equipment and ovens, as the bread was cooked in iron pots or on griddles over open hearths rather than being oven-baked. This method of cooking also gave rise to the bread’s signature dense texture, slightly sour taste, and hard crust.

One of the dishes most associated with St. Patrick’s Day here in America, corned beef, is actually an Irish-American dish. Interestingly enough, the Irish were once historically too poor to eat the corned beef that they produced and exported to England. When they came to America and observed the holiday not as a religious one but instead as a celebration of their homeland, the Irish immigrants began to splurge on the corned beef that they had not been able to afford back home. Traditional accompaniments to the beef were potatoes and boiled cabbage.

And speaking of cabbage…While cabbage was already once incredibly important to the farmers and the poor people of Ireland because it was nutrient dense and grew well, it became an even more crucial part of the Irish diet during the Great Potato Famine, when the potato blight wiped out their crops. Where once the country relied mostly on potatoes to feed them, they now relied on cabbage, making it a food whose presence in Irish cuisine is indelible.

Shepherd’s pie is another dish quintessential to Ireland and, by extension, St. Paddy’s Day. A hearty, flavorful 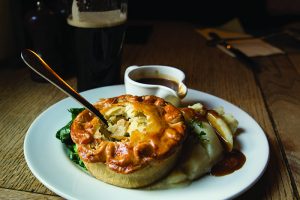 mixture of ground lamb, peas, onions, celery, corn, and carrots cooked in a gravy and topped with mashed potatoes, this “pie” has long been a part of Irish culture and is the perfect way to fill a hungry belly. Traditionally, meat pies made with ground (or minced) meat and mashed potatoes were called cottage pies throughout the countries of Great Britain—Ireland among them. In the late 1800’s, those made with ground lamb became known as shepherd’s pie due to the fact that shepherds tended sheep, while pies made with beef kept the name of cottage pie.

Beloved enough to have its own song, colcannon is a traditional dish of mashed potatoes and cabbage. Most commonly made with potatoes, butter, milk, and cabbage, some recipes substitute the cabbage for kale, and it sometimes also contains such ingredients as scallions, leeks, onions, and chives. Because it was cheaply made, the dish was once a common part of the Irish meal. 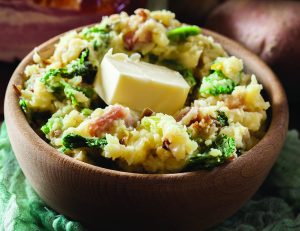 Directions:
In a large pot of water, steam the potatoes for 30 minutes, then drain. Mash thoroughly to remove all the lumps and add 1 stick of butter in pieces. Gradually add hot milk while stirring. Season with a few grinds of black pepper.In another pot,boil the cabbage in unsalted water until it turns a darker color. Add 2 tbsp. butter. Cover with a lid for 2 minutes and continue cooking. Remove from heat and drain thoroughly before returning the cabbage to the pan. Chop into small pieces.Add cabbage and scallions to mashed potatoes, stirring them in gently.Serve in individual soup plates. Using a spoon, make an indentation on the top and put 1 tbsp. of butter into each indentation.