Two modern moms bringing you the hearts and stories of the people creating the best of the South.

photos provided by Say it Southern | story by Greg Alexander 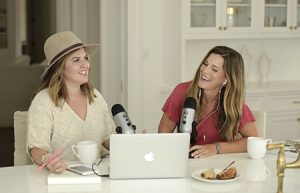 Whether you are currently a podcast listener or not, you must immediately subscribe to Say it Southern (finish this article first, but seriously – then go subscribe).  With over 700,000 podcasts out there, finding a favorite can be overwhelming. With Say It Southern, you will leave inspired, encouraged, and maybe even have a southern accent. Say it Southern is a place to join real, warm conversation, as if you were sitting together on the back porch. Say it Southern tells the stories that matter from the creators and curators of the beautiful South.

Say it Southern was co-founded and is co-hosted by two of the savviest Southern sweethearts you will ever meet. Courtney Goolsby and Sarah Smith are mothers, doers, and dreamers who want to do good, live well, and leave their mark – and always find a reason to celebrate. 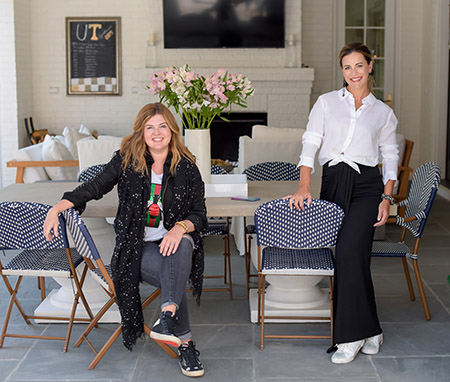 Plato said, “Necessity is the mother of invention,” and that was the case for starting Say It Southern.  As Sarah Stone Smith – former Bachelor Season 8 “winner” was approaching her 40th birthday, she wanted a new challenge.  She described, “I felt like this was the perfect time for me to do and create something I was passionate about, something for me. I had just started listening to podcasts and was searching for podcasts about the people and places of the South. I couldn’t find one I liked so I thought, I’ll start one of my own. I’ll get to meet people and hear stories from all over. But I knew I couldn’t do it alone. I needed someone as passionate as I was about creating something they could be proud of, who would work hard and hold me accountable.  I immediately thought of Courtney.  She is smart, funny, and real. I was always drawn to her. She is a Christian woman that loves and values family but also knows and shares that life is not always easy. Being a good mother, wife, sister, friend is tough and she is open about sharing that with others. When I told her about my crazy idea she was ALL in and the rest is history.” The duo had no clue how to create a podcast but they figured it out, and now, it has become something they are proud of with listeners all over the world, 7% in Australia, oddly enough! With thousands of downloads they receive DMs thanking them for doing this- “your work means something, keep on keeping on.” So that’s what they plan to do.

Their goal was to shine a light on all the inspiring, one of a kind stories of the movers, shakers, and tastemakers of the South. They wanted to celebrate their successes, learn from their failures and be encouraged by the journey, and Courtney and Sarah have done exactly that in just over a year with no sign of slowing down. Their guests are people and products they love and want to learn more about.  Sometimes potential guests reach out to them but most of the time they curate them organically.

We all know the South has interesting people and culture.  That fact brings lots of color, comedy, and even tears to Say It Southern.  When asking Courtney about a favorite episode she didn’t have an answer, and Courtney always has an answer! She finally claimed, “It’s really hard to say- Do you pick the lawyer turned East Tennessee Moonshiner? The girl who called 911 to enter her prize pie in county fair only to then be included on Oprah’s favorite things list? The mother who lost her son in a drowning accident and has been advocating for water safety in Washington, on the Today Show- lobbying for more education about drownings… it’s too had to pick a single one. And it makes the South, the South. We have a grit about us. If we can’t find a way, we make one. Each story becomes my new favorite story.”

As they continue their journey, they plan on doing more public speaking and events for women across the South.  Both women love speaking to crowds, sharing their passion and successes they have achieved.  But most of all they love meeting people and connecting to Southerners from all over. Each listener, man or woman, Southern or not, will be magnetized by these beautiful souls and their special gift of engaging the listeners and helping to promote the stories and accomplishments of each of their guests.  And if you even think about stopping before an episode ends – don’t, because they finish each one with their self-conceived “Popcorn Round.”